The two main types of garlic are classified as hardneck or softneck garlic. These two categories are based on the way the plant develops its flower stalks, its hardiness, and its clove formation pattern. 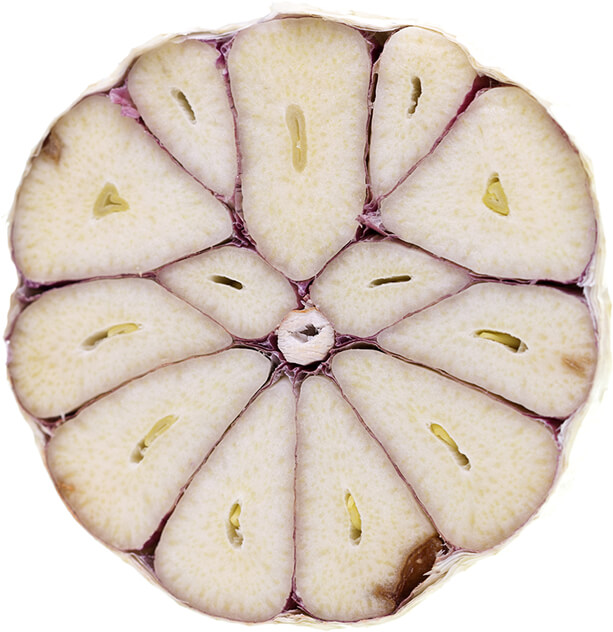 What are hardneck garlic varieties and what does that mean?

Hardneck garlic produces a stalk or scape. The scape itself can be harvested and eaten when it is still soft. It will often bend around in a snake-like shape. Harvesting the scape is thought to allow the bulbs to retain more of the energy for growth.

Above is a photo of a cross-section of a hardneck garlic variety to showcase this "hard" center stalk.

Porcelain Garlic is stronger than average and stores for long periods at room temperature (up to eight months).  It generally has very few, but fairly large cloves. It tends to be more suited to northern than southern climates. Some sub-varieties include Romanian Red, Music, Georgia Fire, German Extra Hardy, Rosewood, and Zemo.

​Rocambole Garlic has a distinctive scape that shoots up in the spring that terminates in a double loop that can be harvested and eaten.  The peeled cloves will be slightly darker in color than most garlic. The Rocambole is somewhat fussy about growing conditions and much prefers northern to southern climates. The bulb is normally composed of six to eight cloves arranged around the scape and it does not store as well as most other garlic varieties. Some sub-varieties include Russian Red and Spanish Roja.

Purple Stripe Garlic is so named because of the purple vertical stripe on the parchment surrounding the bulbs.  It should be noted that the coloration is greatly affected by the growing conditions.  It has a rich flavor and is typically known to store well.  Purple stripe is good for regular use, but also highly recommended for roasting.  Some sub-varieties include Chesnok Red, Metechi, Siberian, and Persian Star. 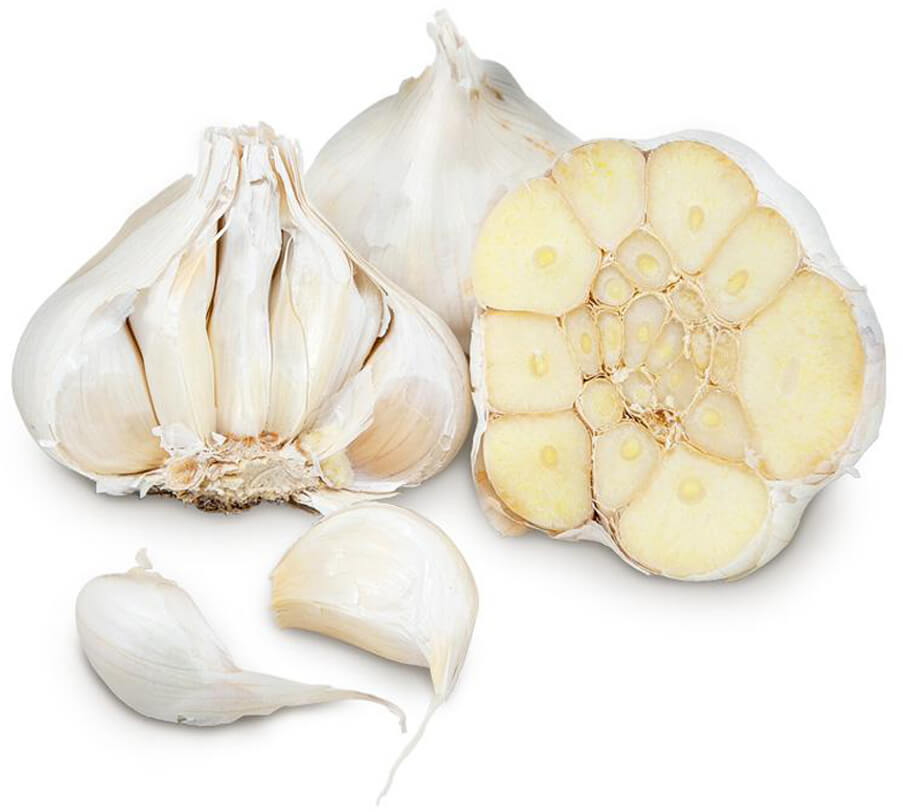 What are softneck garlic varieties and what does that mean?

Softneck garlic does not produce a scape or center stalk. Softneck garlic is the type that is usually braided and it grows in a wider variety of climates and grows faster than hardneck varieties. There are more cloves in the softnecks than the hard-necks and are more time-consuming to peel.

Above is a photo of a cross section of softneck garlic.

Silverskin Garlic can be braided and is considered to be among the longest storing garlic varieties. It is more pungently flavored and on average it will have more and smaller cloves than other varieties.  Sub-varieties include Rose du Var and Nootka Rose.

​Artichoke Garlic is the variety most commonly seen in grocery stores. It produces more cloves than most other garlic types. It is fairly easy to grow and some sub-varieties will occasionally send up a scape.  It comes in a range of intensity and Artichoke Garlic stores well.  Some sub-varieties include Turban, Chinese Purple, California Early (and Late).

Elephant Garlic is not actually garlic at all it is actually a type of leek and is often used for roasting.  It is about twice the size of standard garlic with a milder flavor and similar nutritional value (including the allicin).   The cloves are much larger and it stores much longer than garlic. The bulbs develop corms (little bulblets that develop outside a bulb) that can be split off and used for propagation.

The following garlic types are listed purely for educational purposes. We do not grow all these varieties. To view the garlic we have available for sale please view our shop.

Want to Learn More About Garlic?

Check out our entire page about planting, growing, and harvesting garlic today.

Get Some Garlic Tips! (Coming Soon)

Great!  We have an expert on our team that has created a helpful resource with videos on how to braid your own garlic!